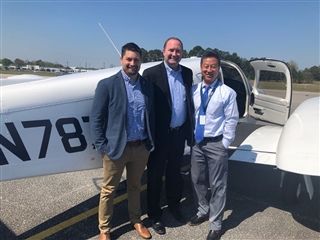 The launch of the Landmark Aviation Academy will address the growing worldwide commercial airline demand for qualified pilots and related careers. An August 2017 article in Forbes estimated the world will need 637,000 new airline pilots by the year 2037. The FAA (Federal Aviation Administration) requires airline pilots in the United States to retire at the age of 65; therefore, every U.S. airline can track their pilot hiring needs. Click here to read the Forbes article about worldwide pilot demand.

Landmark is uniquely situated ten minutes south of Hartsfield-Jackson Atlanta International Airport, the home, and headquarters of Delta Airlines, the second-largest airline in the world. The aviation academy will prepare students to enter one of Delta’s partner universities/flight schools in their PROPEL program which is uniquely designed to forge an intentional path from the classroom to an advanced and sophisticated cockpit.

Landmark will be utilizing the flight and training experiences of one of its own administrators, Dr. Jim Lee, who heads up Biblical Diversity and Community Relations. Starting from zero flight time in 1996, Lee decided to pursue a dual career as a minister and an airline pilot. After three years of training and building valuable flight time as a traffic watch pilot over the freeways of Los Angeles, Lee was hired to fly for SkyWest Airlines, a regional airline for United and Delta. For two years, he flew as a first officer before hanging up his uniform to work solely in private Christian education. Little did he know that his 3,000 hours of flight time would intersect with the birth of Landmark’s Aviation Academy seventeen years later.

Lee’s dad started working for a major airline when he was three years old. Taking into consideration his long history with aviation, he says, “It has never been a better time for a Landmark student to make the decision that she or he wants to pursue a career in aviation. Airlines will be in desperate need of highly qualified pilots and other related personnel and that’s where the aviation academy will give students a major head start to an adventurous and lucrative career.”

Landmark Christian School, Head of School, Dr. Jason McMaster cast the Aviation Academy vision at Landmark and looks forward to Landmark inspiring and teaching future aviators and airline personnel. McMaster adds, “I believe God has situated us in a unique and timely position to meet the burdening demand for excellent and exceptional pilots. Someday, we will be passengers on a commercial airline flight with a Landmark graduate in the cockpit. Needless to say, we are thrilled about what is beyond the horizon.”

The Landmark Aviation Academy will start in the fall of 2019 with its first course: Aviation 1. It will continue to add courses as demands increase. If students wish to pursue their Private Pilot’s license while enrolled in the Aviation Academy, Landmark will steer them towards local flight training opportunities.
Back
Every student prepared to impact the world for Jesus Christ