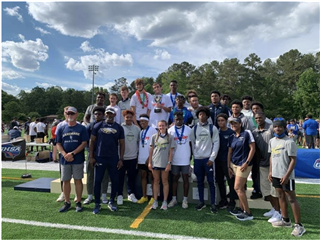 5/18/2021
But those who hope in the Lord will renew their strength. They will soar on wings like eagles; they will run and not grow weary, they will walk and not be faint. Isaiah 40:31
May 15, 2021, Landmark Christian School Boys High School Track & Field Team took first place in the GHSA State Championship, led by coaches Brittany Truitt, Milton Campbell, Sierra Dukes, Mike Cornelison, Vincente Cobb and Becca White. While we had several stand-out performances, it all came down to the final race of the three-day event: the Boys 4 x 400m Relay ran by Joshua Smith (‘22), Micah Dennis (‘22), Dylan Span (‘21), and Zack Truitt (‘21), with a time of 3:20.31, finishing 1st and securing the title of GHSA GA State Champions in Track and Field.
On April 25, 2021, our Middle School Girls Track and Field also won the GA State Championship title. Coach Campbell shares, “I am humbled to coach these young men and women. Two state team titles in my first year is pretty special. Our head coach Brittany Truitt led us well. I am so proud of these student-athletes. It is incredible to see their hard work pay off.”
“Track is a Beast” - all Coaches and Runners
Track & Field Medalists, High School:
Of the relay team, two of our runners, Joshua Smith (‘22)  and Zack Truitt (‘21), took 1st place titles. In the Boys Triple Jump, Joshua Smith (‘22) took first place with a mark of 48’ 9.50”. This mark broke the state record set by Shannon Sharpe in 1986. It also set a new mark for all those that come after Joshua to strive for. From community coach and trainer, Vincente Cobb, “Joshua Smith not only won the triple jump and is now state champion, but he smashed the 35-year-old record by hall of fame former NFL star Shannon Sharp! Leaping a distance of 48 feet 9 ½”. This jump will rank Joshua as one of the few juniors in the nation to jump this far! Earlier today in the long jump Joshua jumped 22’4” - just one inch off the Landmark Christian school record and a PR for third place in the state championship long jump. Congratulations, Joshua Smith!”
Here are some highlight records from the event:
In the Boys Triple Jump, Dylan Span finished 3rd with a leap of 44’6”.
In the Boys 800m run with a time of 1:56.13, placing 1st, Zack Truitt (1:56.13, 1st); Boys 1600m run with a time of 4:19.01, placing 1st, Zack Truitt.
Also medaling in the Boys 800m Run, with a time of 2:02.02, taking 5th place, Caden Smith (‘22).
In the Girls’ 4 x 100m Relay, with a time of 51.59, placing 6th, Hope Clerk (‘22), Christina Boyd (‘21), Symonne Adams (‘22) and Faith Alleyne (‘21).
In the Girls 3200m, with a time of 11:56.79, placing 7th, freshman Turner Guerard (‘24)
In the Boys 400m Dash with a time of 49.11, placing 3rd, Zack Truitt; Micah Dennis finished 6th with a time of 50.41.
In the Boys 4 x 100 Relay, with a time of 44.08, placing 6th: Joshua Smith (‘22), Micah Lewis (‘23), Dylan Span, Brandon Montford (‘22).
Winning Culture of Individual and Team Excellence
Rev. Campbell was invited to join our solid team of coaches this past January at the beginning of track and field season. When asked what his philosophy was behind winning, and what it means to be a War Eagle, he shared the following:

Rev. Milton Campbell has two daughters, Malia (‘25) and Moriah (‘27). The Campbells have been part of the Landmark family for nine years. Following in their daddy’s footsteps, both of his daughters were instrumental in helping the Landmark Middle School Girls Track team win the state title in April. Malia finished 3rd in the 400, with a time of 58.53, and 7th in the 200, with a time of 26.29. Little sister Moriah finished 8th in the 100 with a time of 12.96 and 8th in the 200 with a time of 26.42. They joined forces with Shari Brown (‘25) and MiAangel Allrich (‘25) to finish 3rd in the 4x100 with a new school record of 50.70. Shari, Malia, Moriah, and Cristiana Cachere (‘25) joined forces for 3rd place in the 4x400 with a time of 4:10.20, also a new school record. Shari Brown, with a time of 2:18.72, lowered her school record in the 800, placing 3rd.  Earlier that day she placed 5th in the 1600m with a time of 5:30.06.  Another middle school stand-out included Chase Story, who placed 6th in the boys shot put with a throw of 38 ft 6 inches and 5th in the boys discus with a throw of 124 ft 11 inches.
During the middle of track season, on April 13, 2021, Rev. Campbell attended the Cross Country Awards Banquet. After he was introduced by Coach Brittany Truitt he congratulated our runners, expressed heartfelt gratitude and admiration of Coach Brittany’s Cross Country team’s many successes during the fall season, and shared the following: “Track is a beast, and God’s timing is amazing. I am so excited to begin this journey of working with our student-athletes. I always call them that, because while they are athletes, they are students first. God has given them a gift; it is a blessing to serve through coaching a sport that I love. It is a blessing that I have been invited to disciple, train, cultivate talent and help them reach their full potential.”

Cross Country and Track had a major impact on Coach Campbell’s life. He competed on a GA state level in middle and high school and attended UNC Chapel Hill on a full-track scholarship. Rev. Campbell then went on to run professionally. Later, he attended seminary and is a full-time pastor at Midtown Bridge Church. Coach Campbell continues, “God gave me the gift of running, and track became an outlet to express myself. Everyone around the state of Georgia knows about Landmark. This is a place known for success, not just in athletics, but in academics, in the arts-- this is a place that is building good citizens--because we’re building students’ identity in Christ. I am excited to expand upon what Coach Thorn started with this track program many years ago, and what Coach Brittany Truitt has continued. I am a lifelong learner and an obsessive student of sports. I throw myself into researching, to learning, fully immerse myself in it because I love it. I love seeing students reach their full potential and I enjoy winning.”

To Be Taken at His Word
The award banquet for track was on April 13. Coach Campbell went on to predict a MIddle and High School GA State Title and Championship. He is a man to be taken at his word. God has equipped him with insight, speed, and follow-through.

“The sport has given so much to me. To see these young athletes fall in love with what I love:  to fall in love with running, is the greatest gift I could ask for. Some of the best times of my life, and some of the strongest relationships I have formed, were done so by running alongside each other, through all types of environments. When it was hot, cold, windy, rainy--we showed up to prove it to ourselves and for each other. We worked hard, trained hard, conditioned, prepared and won, together.”

In the Long Run
The real way to become a great runner is to join a great team. In the long run, culture has the power to shape our identity. Over time and under the right circumstances, the norms and values of the team to which we are a part of becoming our own. We Internalize them. We carry them with us. Identity influences every aspect of our character, but it has special relevance to excellence. Often, the critical decisions we make--to get up one more time, to stick it out through this miserable, exhausting practice, to run five miles with our teammates when on our own we might only run three--are a matter of identity perhaps more so than anything else. The source of our strength is the person we know ourselves to be--Christ in us. 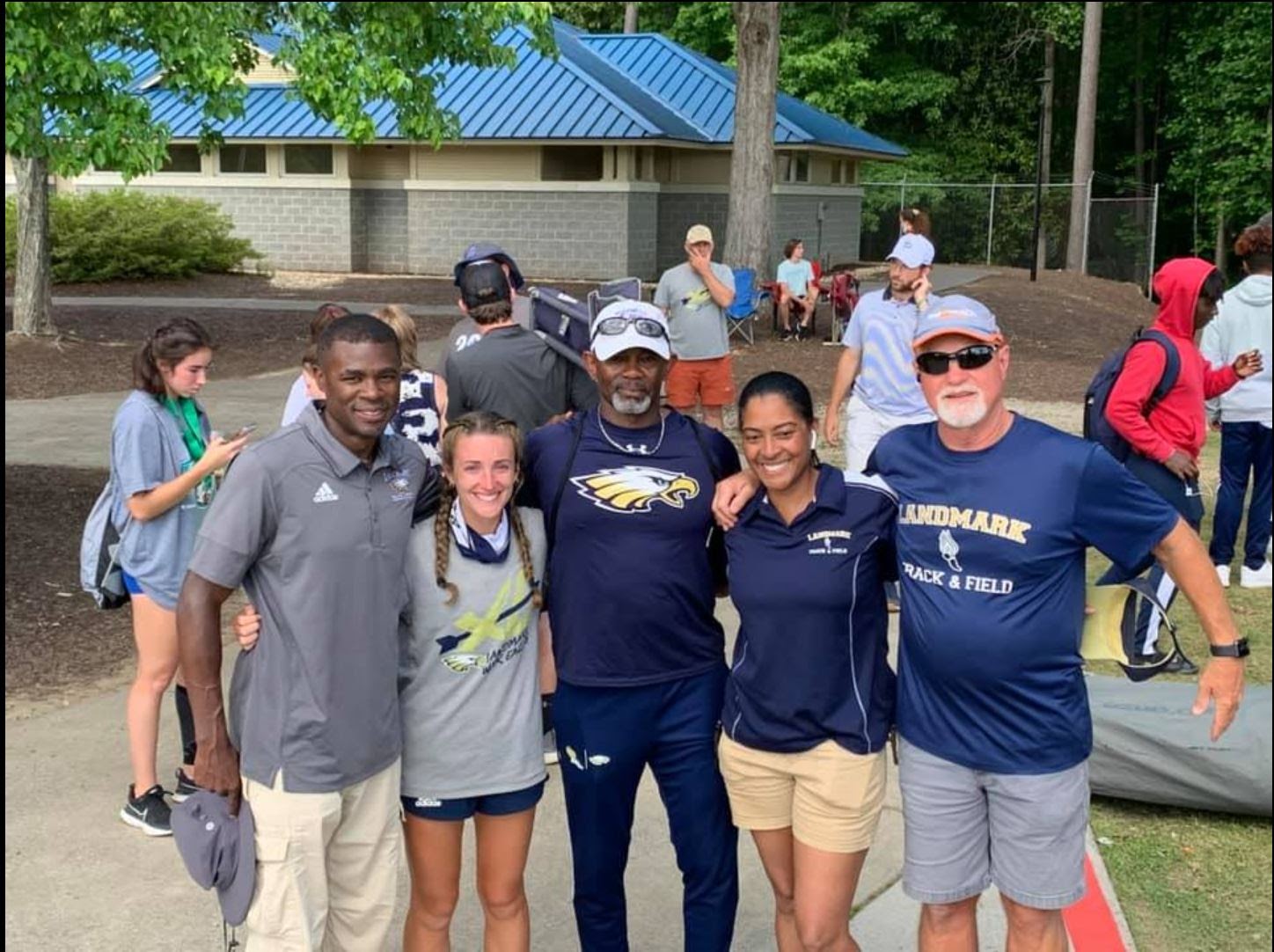 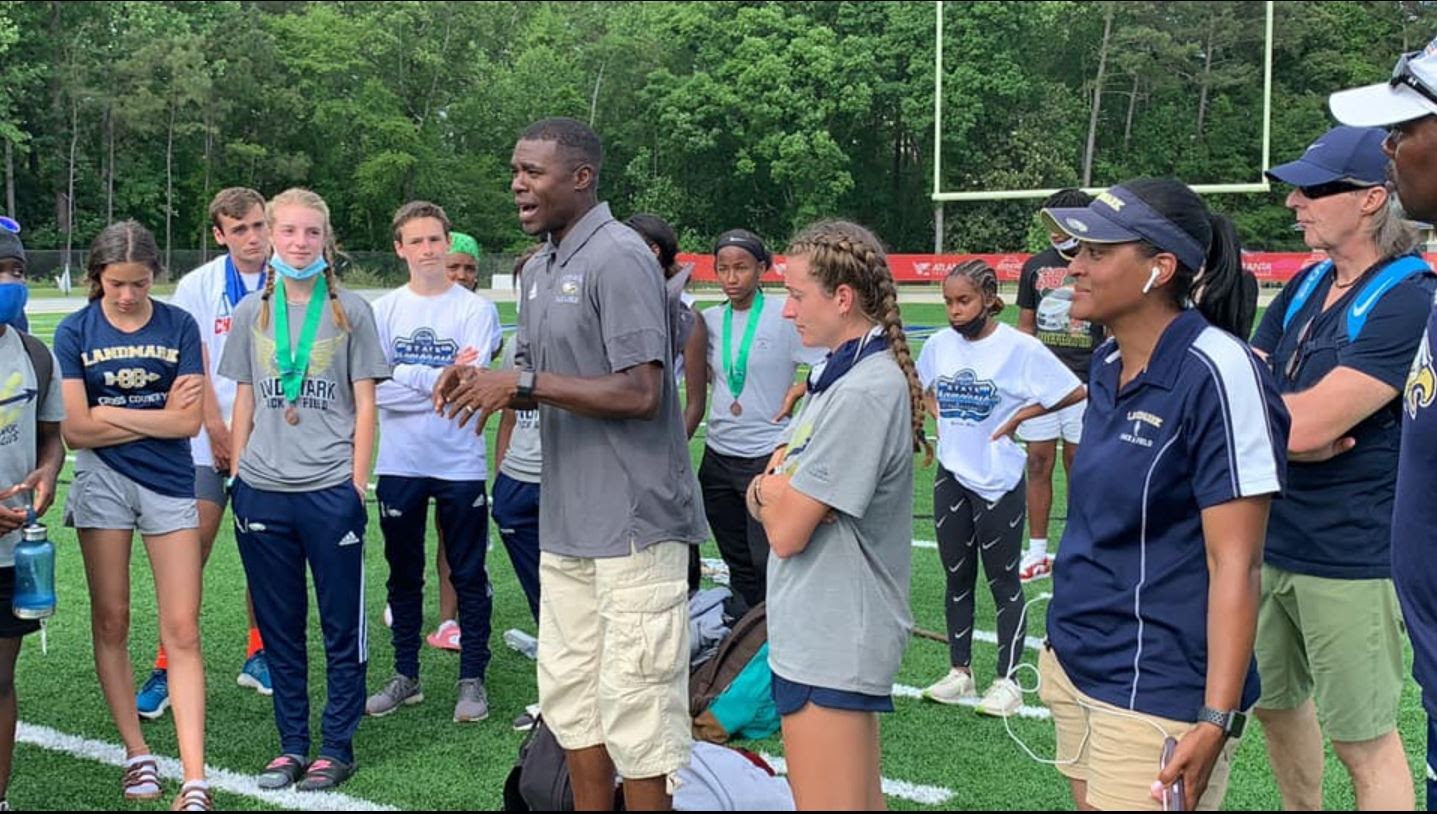 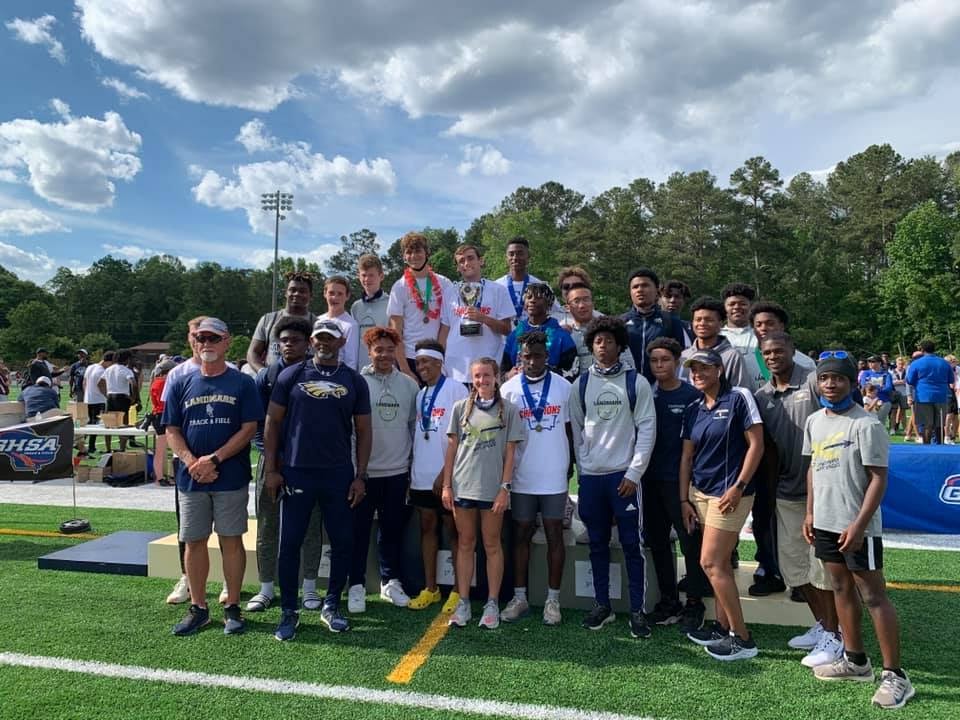 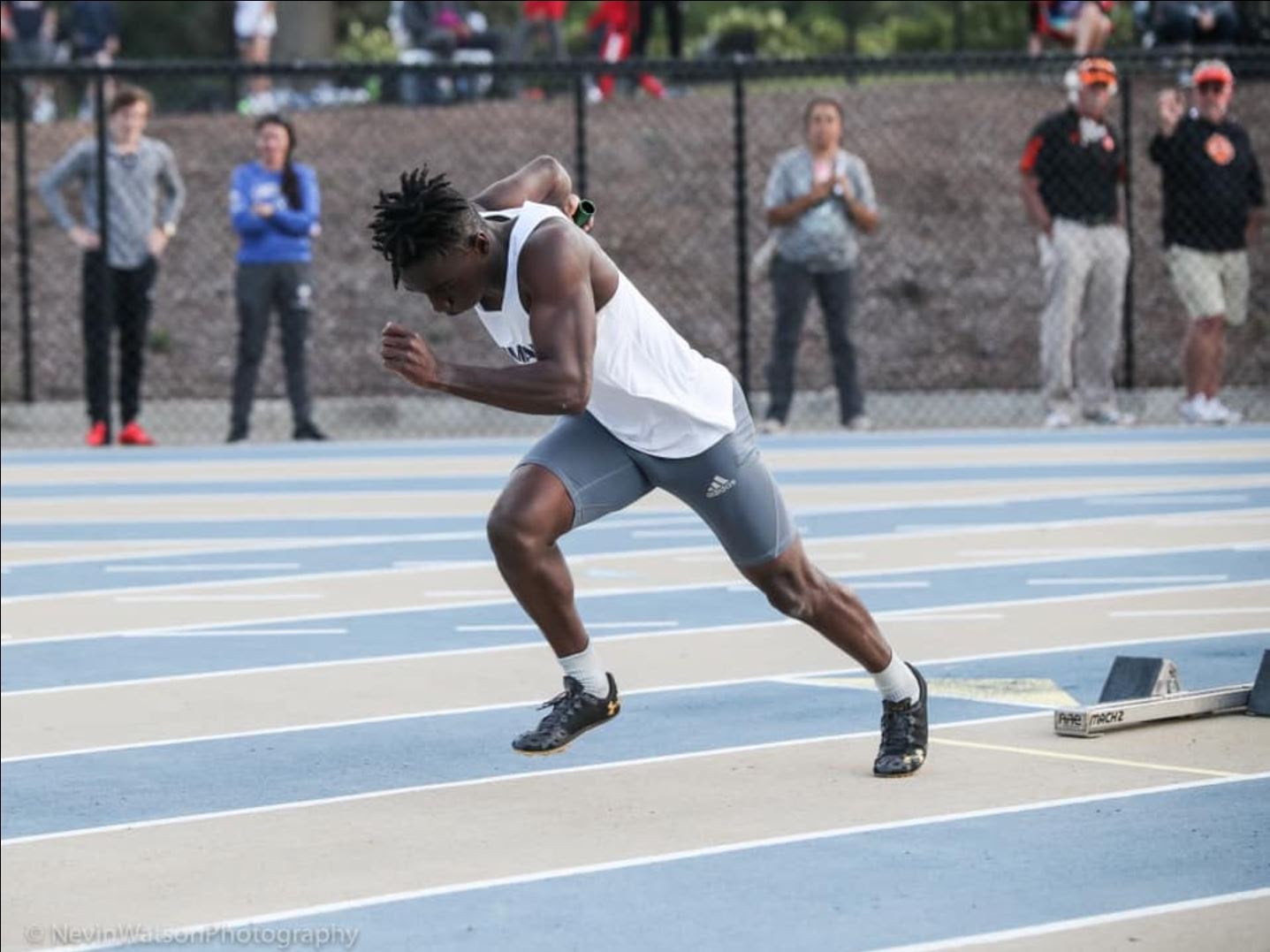 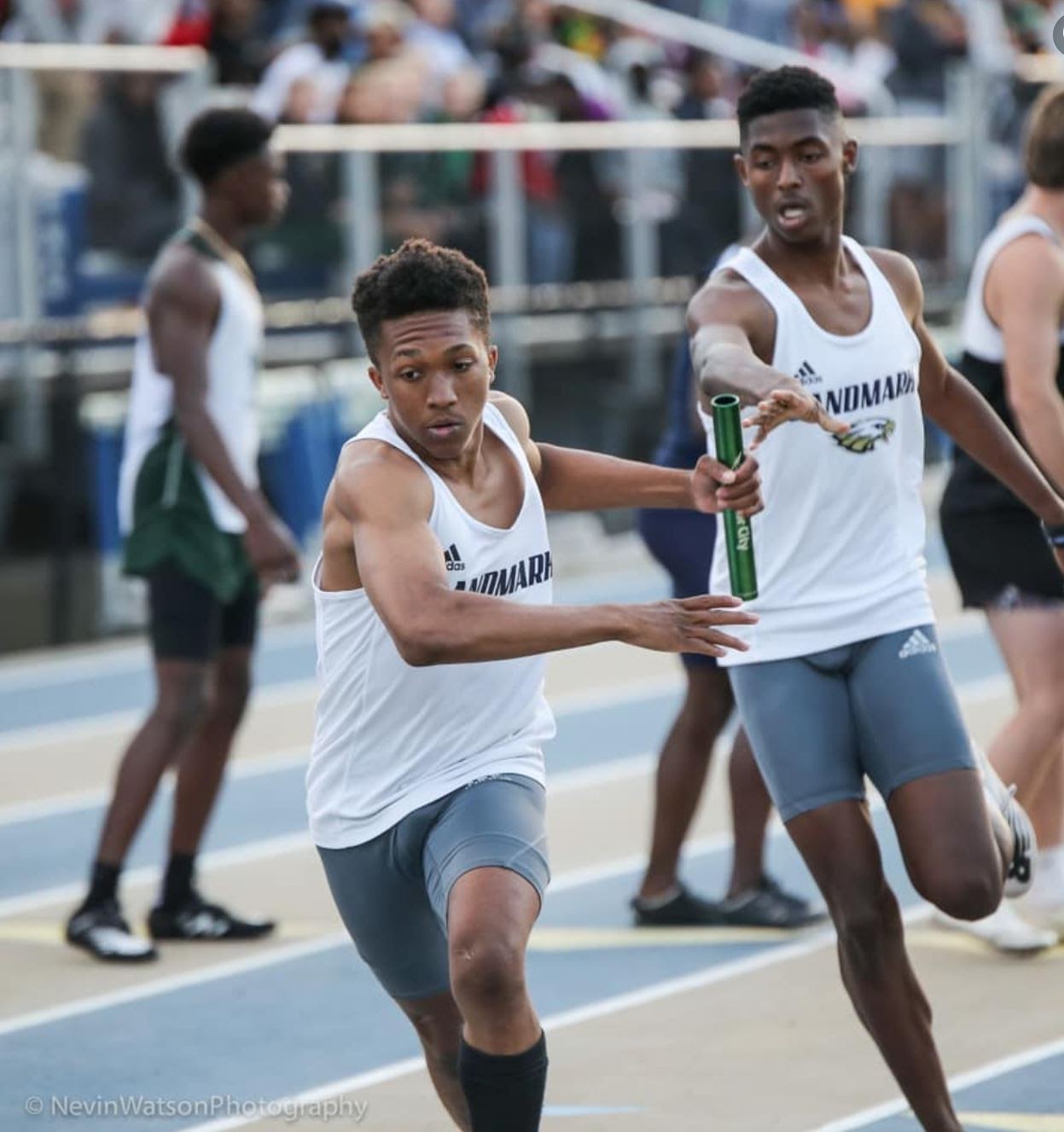 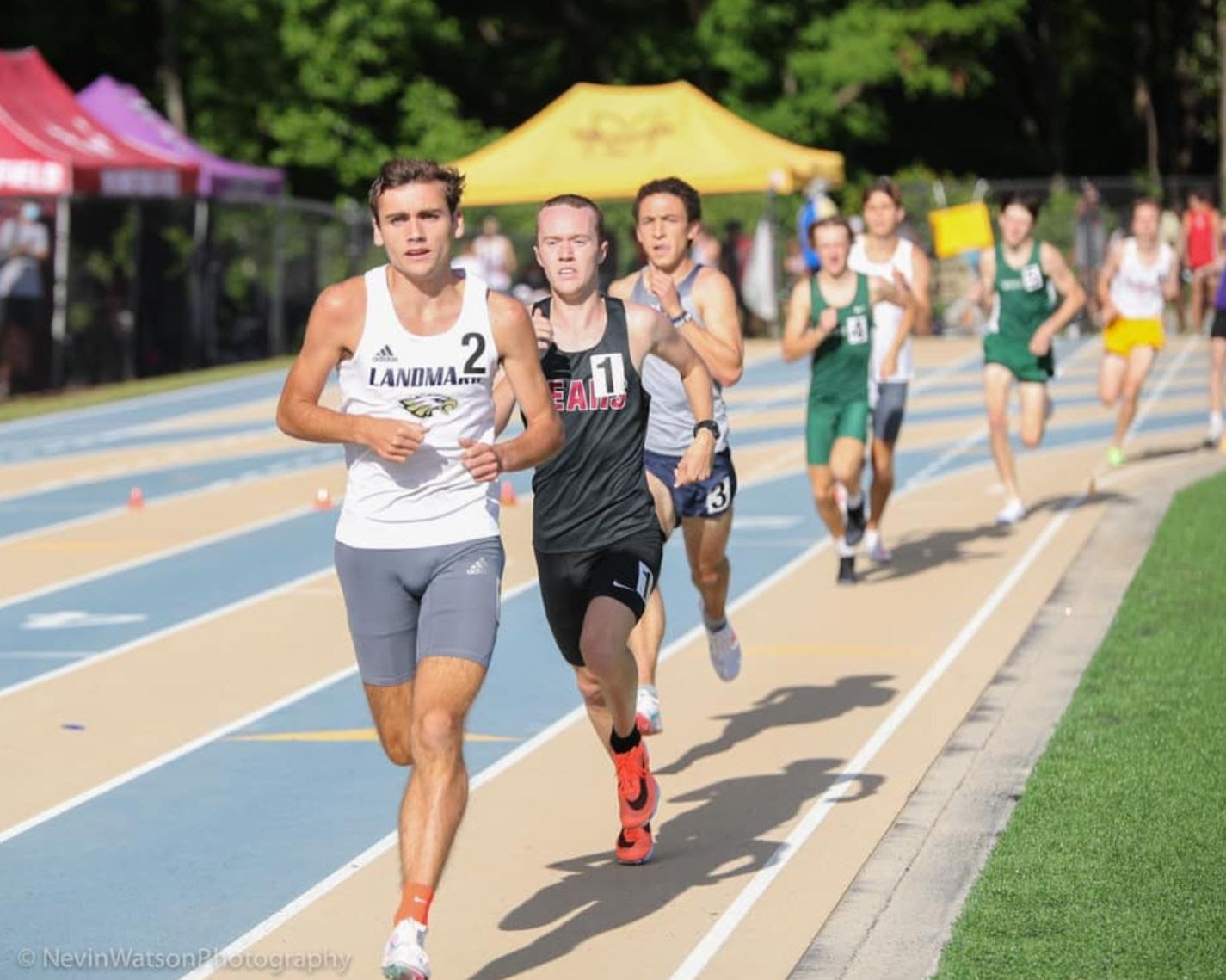 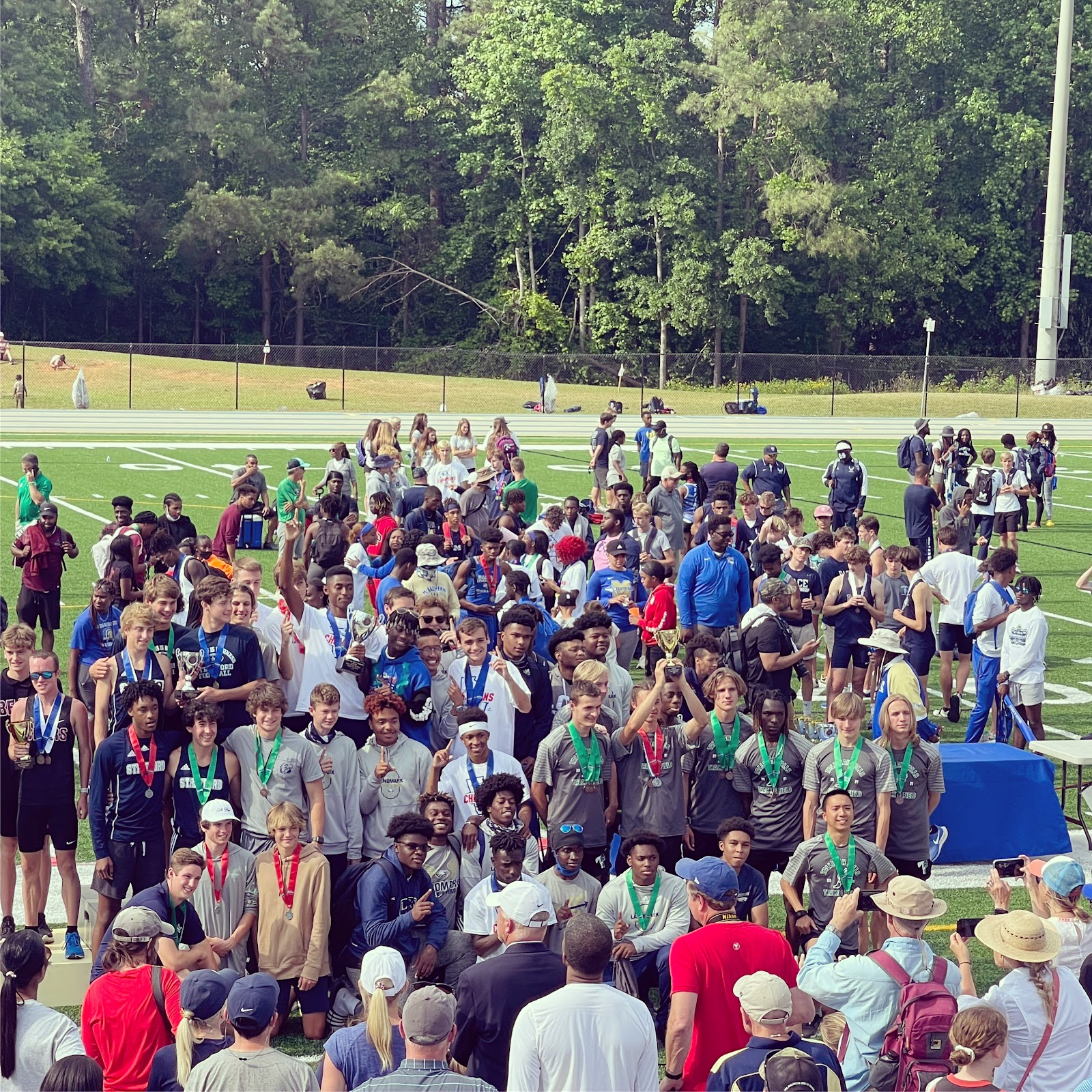 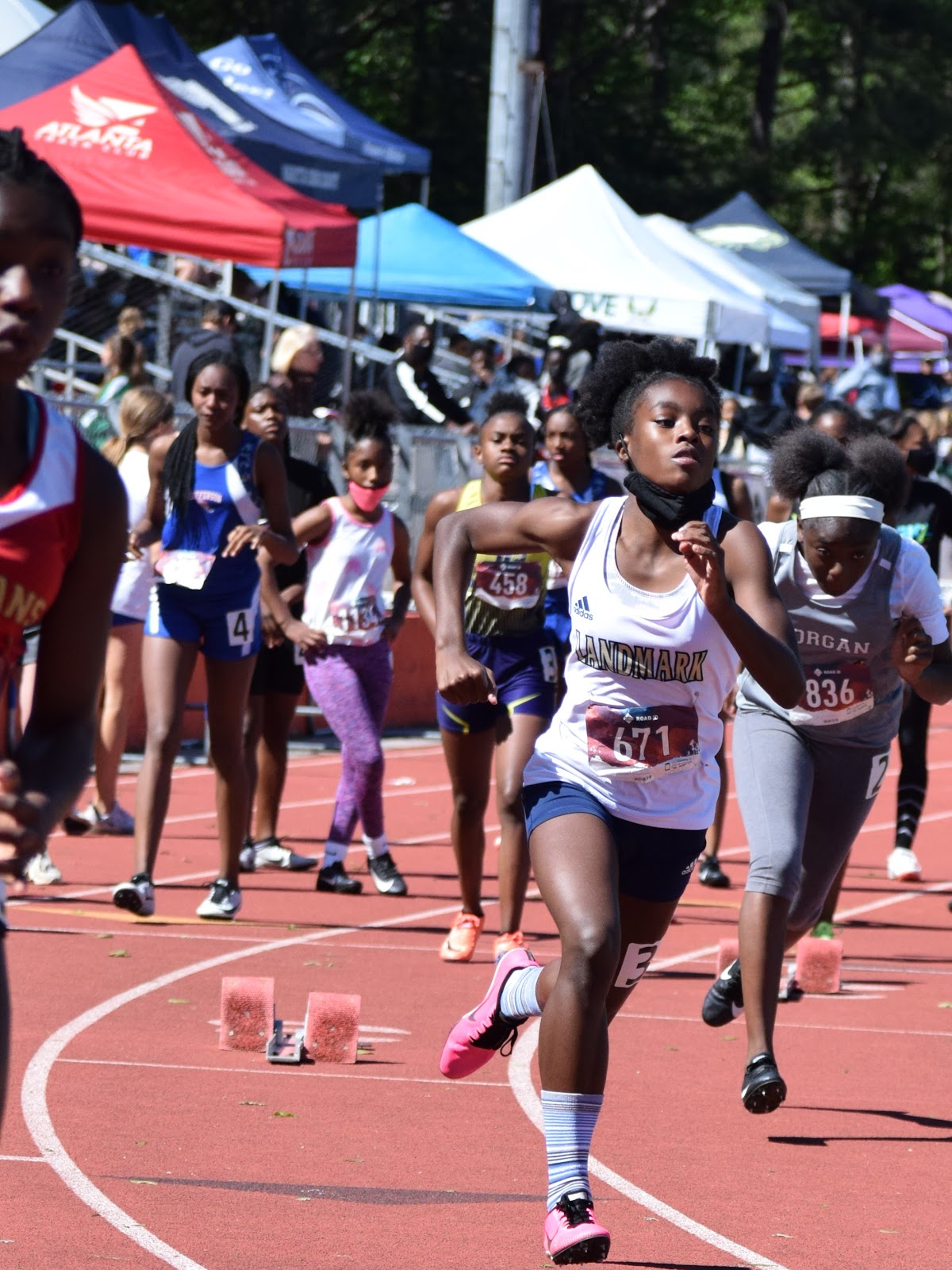 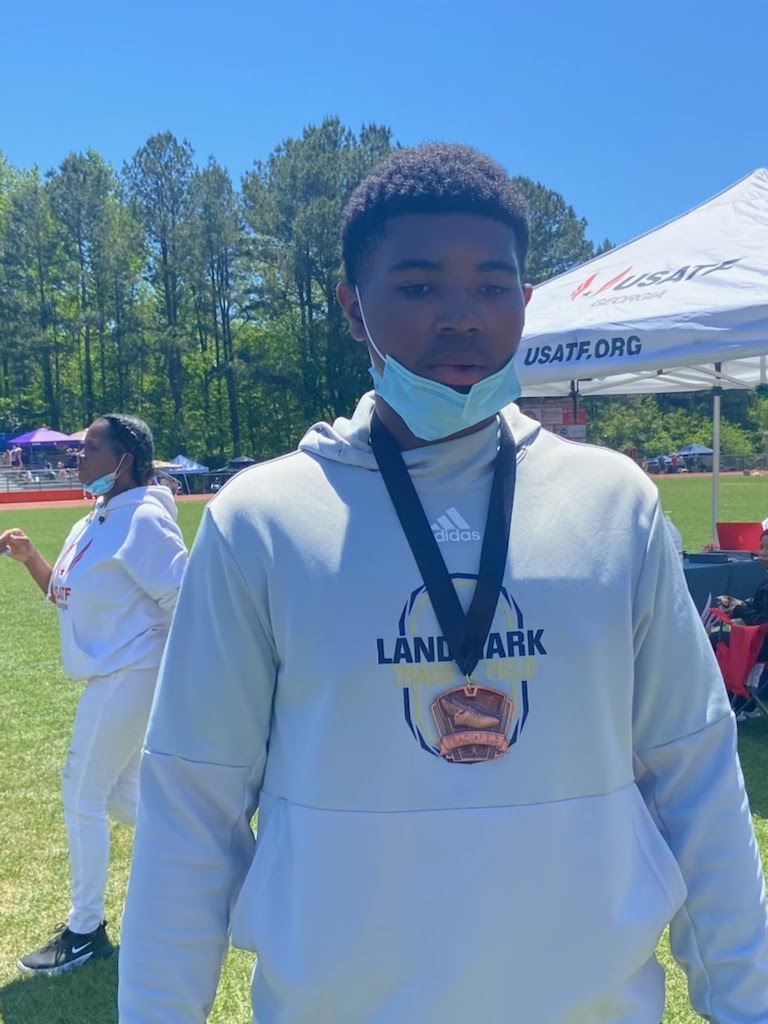 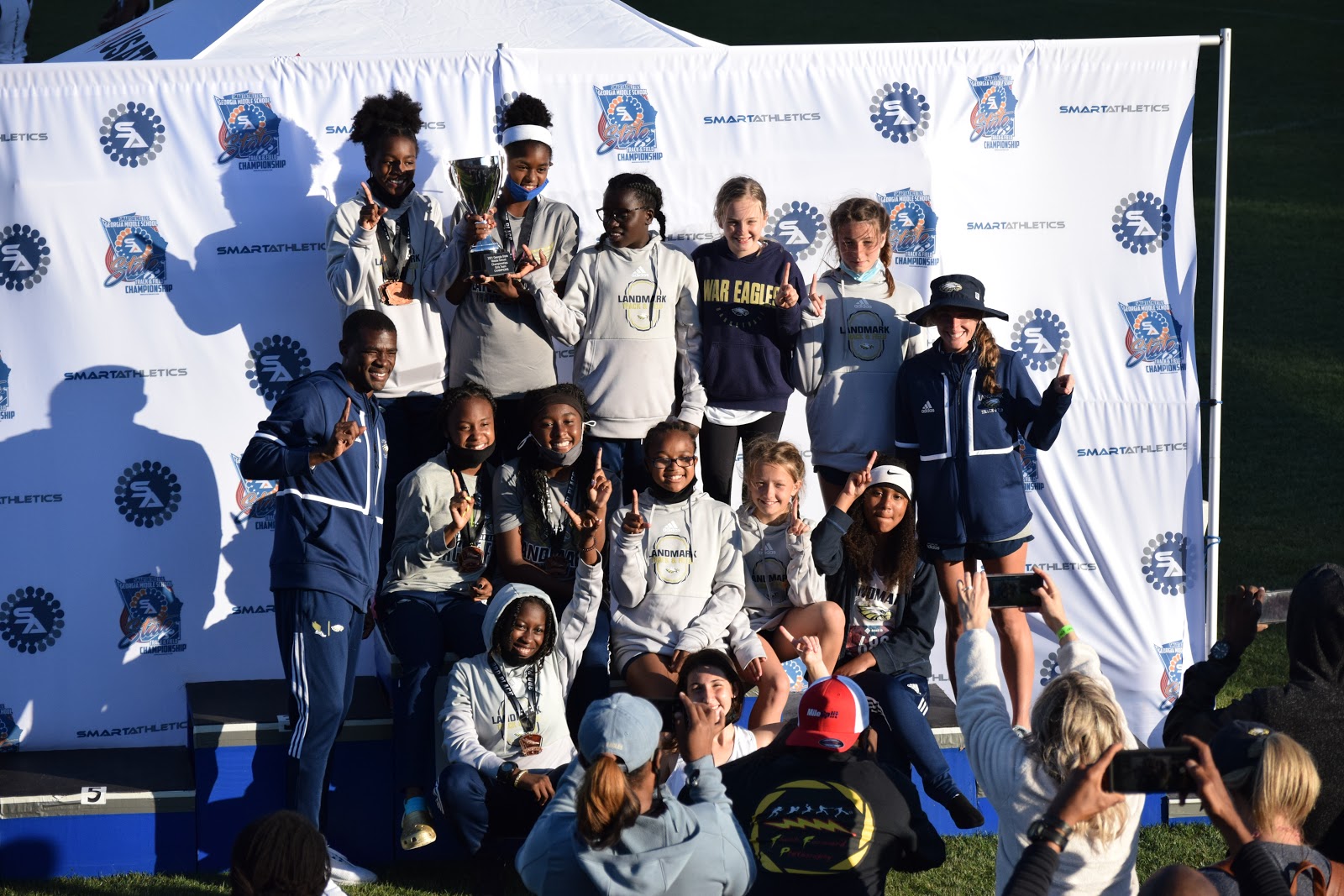 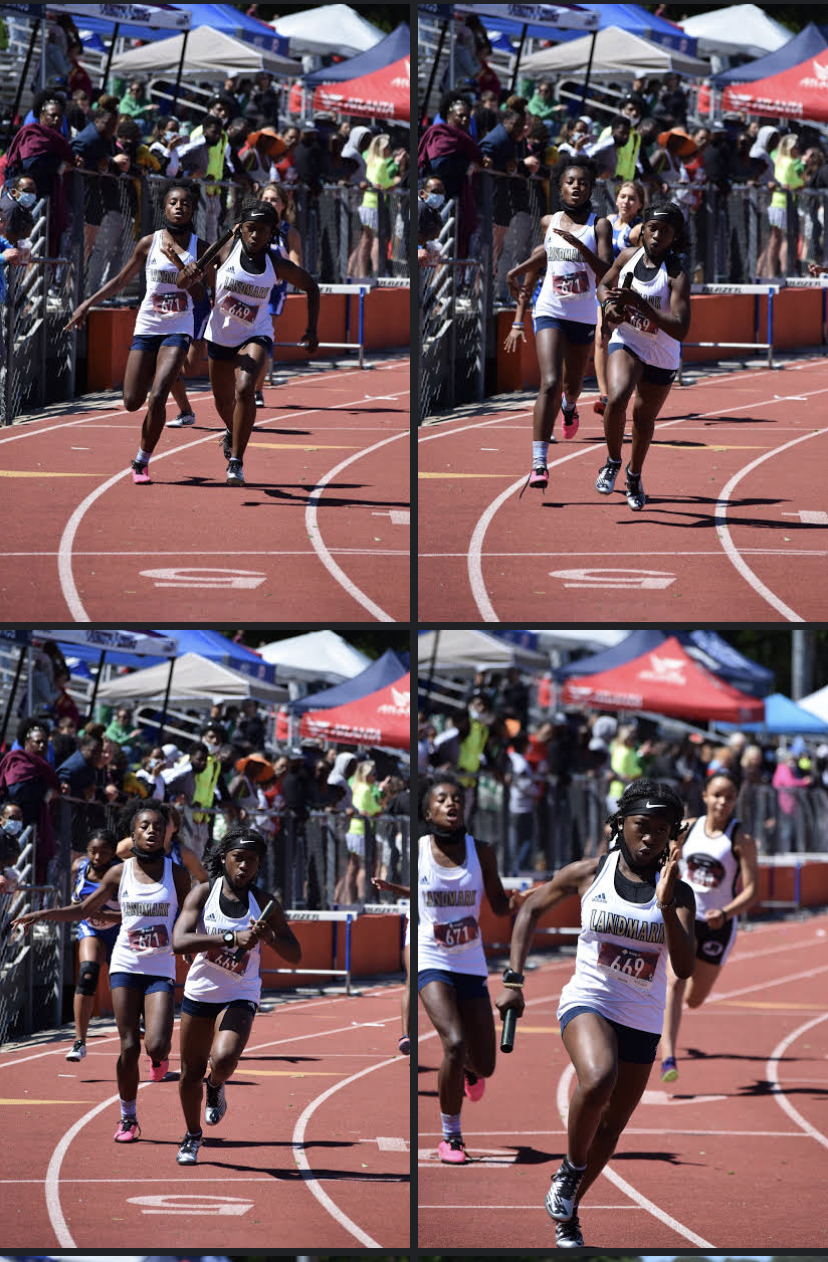 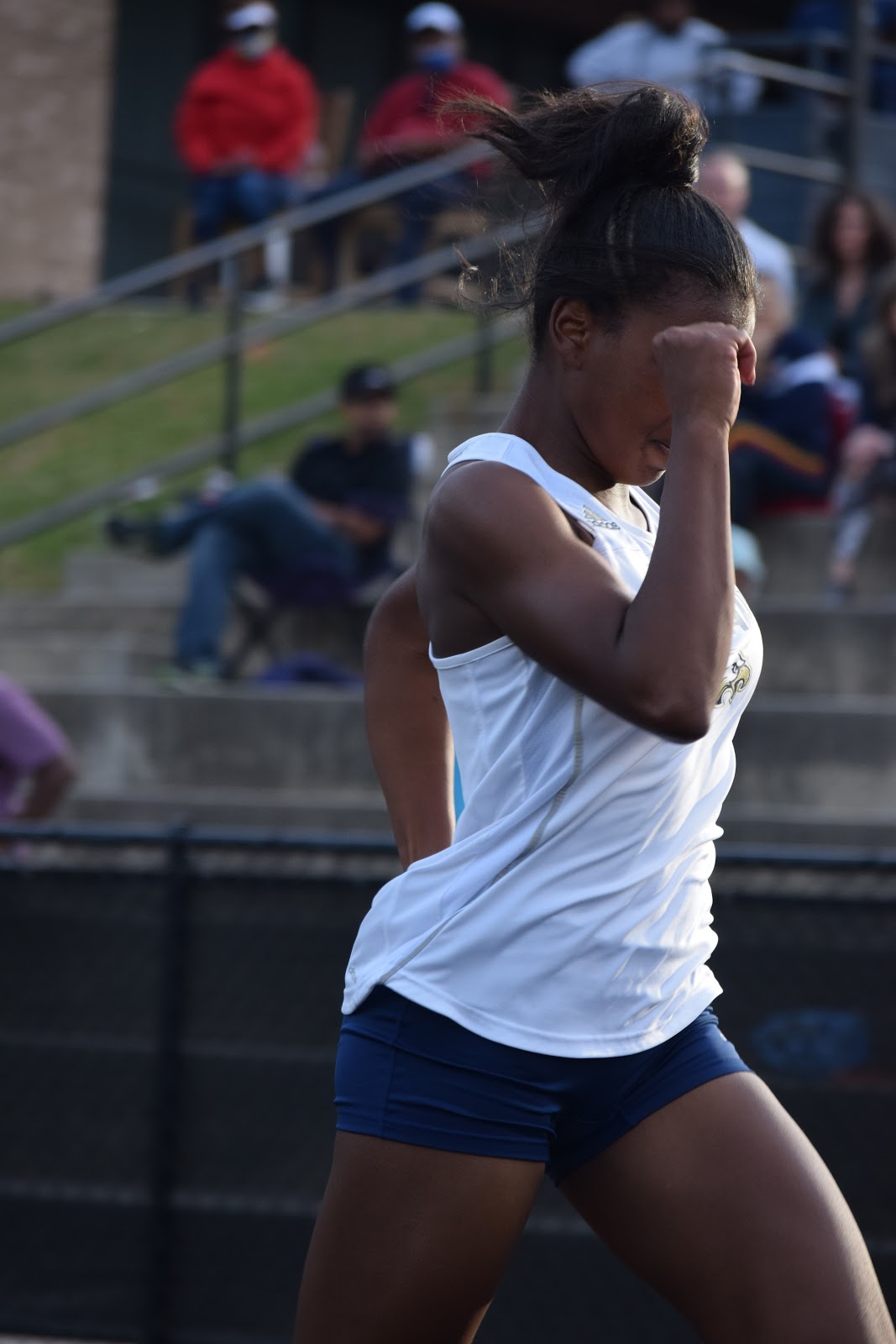 Landmark Christian Christina Boyd along Hope Clerk (‘22), Symonne Adams (‘22) and Faith Alleyne (‘21)
Back
Every student prepared to impact the world for Jesus Christ