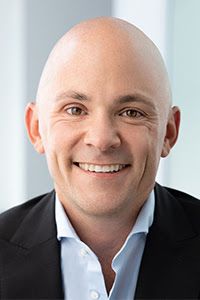 10/13/2021
As we head into Homecoming and welcome our alumni home, please help us congratulate, Andrew Cathy, Landmark Christian School, Class of 1997.

Chick-fil-A announced that Andrew Cathy, Landmark Christian Class of 1997, will begin as CEO on November 1. He is the third generation of Cathys to become Chief Executive Officer, taking the reins from his father Dan Cathy, who has served in this position since 2013.
In addition to being a graduate of Landmark Christian School, Andrew taught at Landmark, developed a business curriculum, and helped coach track and field.

Landmark Campus Pastor Fred Gilkeson says, “I remember Andrew as a 6th grader. Through the years at Landmark, he played football, wrestled, and ran track. He was a hard worker and very motivated. Andrew was always driven. He knew one speed in athletics  -wide open! In PE, during testing for the Presidential Fitness Program, Andrew and another student (John Harkey) were close in their results and were at the top of the class. For days they went back to the same tests to try to outdo the other. I finally had to say, ‘Ok. This is the last time.’ Without that, I think I would still be there with them as they tried to prove who was the best. I loved that.”

Gilkeson continues, “Later as a teacher at Landmark, he poured into the next generation. When he left Landmark, he went to work in Chick-fil-A restaurants in roles from the ground up. Now a father of four, he and his wife, Mandy, are pointing his children to Christ. I talked with him recently. He is ready for the next adventure the Lord has given him.”

Dr. McMaster, Head of School at Landmark Christian, comments, “Andrew has a tremendous legacy at Landmark as he and his brother Ross are both graduates. Andrew was an outstanding teacher, coach, and mentor as well. The Landmark family is so proud of him and will lift his family in prayer as he enters this wonderful new season of leadership.”

Dan Cathy, who guided Chick-fil-A through an incredible run of growth and changing industry landscape, refers to Andrew as “a proven Chick-fil-A leader who understands our culture and knows our business.” Andrew Cathy said that he has ”been fortunate to work with and learn from so many Chick-fil-A operators and executive leaders, including my dad and grandfather.”

Andrew Cathy is the owner of Four Stones Real Estate, and before being named CEO, was the executive vice president of operations for Chick-fil-A, Inc., where he has overseen the selection, cultivation, and development of the Chick-fil-A franchised restaurant owners and is responsible for all business operations of Chick-fil-A restaurants nationwide.

Congratulations, Andrew! We are so proud of you and pray for your continued success!
Back
Every student prepared to impact the world for Jesus Christ