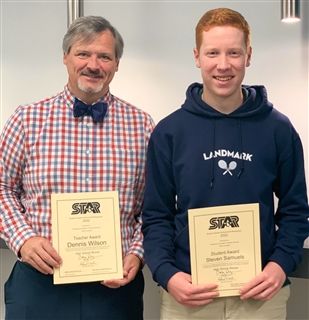 We Have Some STARS Here At Landmark

3/24/2022
Landmark Christian School senior Steven Samuels has been named the school’s 2022 STAR Student. The Midtown Atlanta Rotary Group announced the honor Tuesday, February 22, 2022, at a virtual breakfast held in honor of all Fulton county schools STAR award winners. Steven selected Dennis Wilson, Honors Multivariable Calculus II teacher at Landmark Christian School, as his STAR Teacher.
Steven, the son of Ben and Jen Samuels of Tyrone, earned STAR recognition for achieving the highest score in his class on the SAT in one test sitting and earning a GPA within the Top 10% of his graduating class. Steven plans to attend Auburn University in the fall of 2022 and pursue a Bachelor of Science in Aerospace Engineering.
The PAGE Student Teacher Achievement Recognition (STAR) program is sponsored, administered, and promoted by the Professional Association of Georgia Educators (PAGE) and the PAGE Foundation. Since its inception in 1958, the STAR program has honored nearly 28,000 students and the teachers selected as the most influential to their academic achievement.
STAR begins each year in participating Georgia high schools when the STAR student is named and chooses a STAR Teacher to share in this recognition. The students and their teachers are honored by their schools and receive special recognition in their communities from one of the more than 172 statewide civic organizations and businesses that serve as local sponsors of the STAR program.
Students then compete for school system recognition as the top STAR Student, and those winners compete for region honors. Region winners contend for the honor of being named State PAGE STAR Student. STAR Teachers continue on with their STAR Students at every level of the program.
When you see these Landmark STARS in the hallway, congratulate them on being an example of academic and teaching excellence!
Back
Every student prepared to impact the world for Jesus Christ